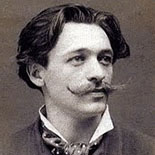 Fantasmagorie is an 1908 French animated film by Émile Cohl. It is one of the earliest examples of traditional (hand-drawn) animation, and considered by film historians to be the first animated cartoon. 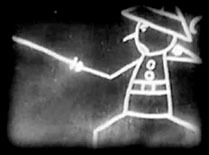 The film was created by drawing each frame on paper and then shooting each frame onto negative film, which gave the picture a blackboard look. It was made up of 700 drawings, each of which was exposed twice (animated “on twos”), leading to a running time of almost two minutes. It borrowed from J. Stuart Blackton, the “chalk-line effect”; filming black lines on white paper, then reversing the negative to make it look like white chalk on a black chalkboard. Blackton and Cohl also borrowed some techniques from Georges Méliès, such as the stop trick.