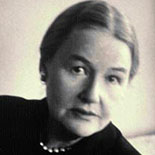 Rebecca Clarke (August 27, 1886 – October 13, 1979) was an English classical composer and violist best known for her chamber music featuring the viola.

She was born in Harrow and studied at the Royal Academy of Music and Royal College of Music in London, later becoming one of the first female professional orchestral players. Stranded in the United States at the outbreak of World War II, she settled permanently in New York City and married composer and pianist James Friskin in 1944. Clarke died at her home in New York at the age of 93.

Although Clarke wrote little, due in part to her ideas about the role of a female composer, her work was recognized for its compositional skill. Most of her works have yet to be published (or have only recently been published), and were largely forgotten after she stopped composing. Scholarship and interest in her compositions revived in 1976. The Rebecca Clarke Society was established in 2000 to promote the study and performance of her music.