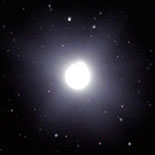 Its faint luminosity comes from the emission of stored thermal energy. The nearest known white dwarf is Sirius B, 8.6 light years away, the smaller component of the Sirius binary star. There are currently thought to be eight white dwarfs among the hundred star systems nearest the Sun.

The unusual faintness of white dwarfs was first recognized in 1910 by Henry Norris Russell, Edward Charles Pickering, and Williamina Fleming; the name white dwarf was coined by Willem Luyten in 1922.

White dwarfs are thought to be the final evolutionary state of all stars whose mass is not high enough to become a neutron star—over 97% of the stars in the Milky Way. After the hydrogen–fusing lifetime of a main-sequence star of low or medium mass ends, it will expand to a red giant which fuses helium to carbon and oxygen in its core by the triple-alpha process. If a red giant has insufficient mass to generate the core temperatures required to fuse carbon, around 1 billion K, an inert mass of carbon and oxygen will build up at its center. After shedding its outer layers to form a planetary nebula, it will leave behind this core, which forms the remnant white dwarf. Usually, therefore, white dwarfs are composed of carbon and oxygen. If the mass of the progenitor is between 8 and 10.5 solar masses, the core temperature is sufficient to fuse carbon but not neon, in which case an oxygen-neon–magnesium white dwarf may be formed. Also, some helium white dwarfs appear to have been formed by mass loss in binary systems.