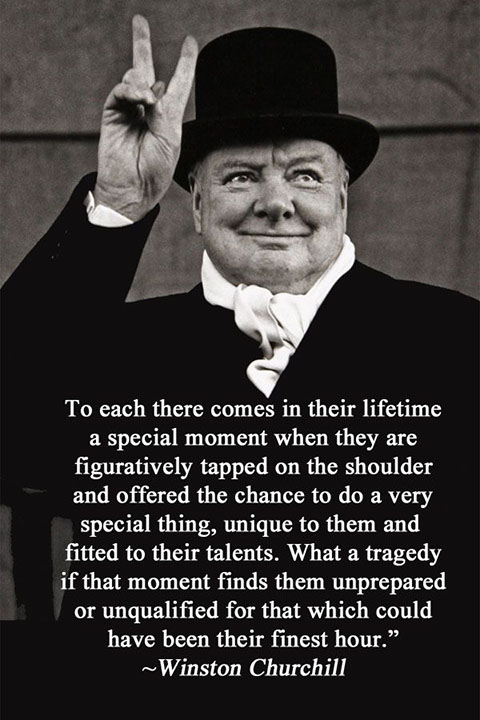 This was their finest hour is the title commonly used for a speech delivered by Winston Churchill to the House of Commons of the Parliament of the United Kingdom on June 18, 1940. It was given just over a month after he took over as Prime Minister of the United Kingdom at the head of an all-party coalition government.

It was the third of three speeches which he gave during (roughly) the period of the Battle of France.

He justified the low level of support it had been possible to give to France since Dunkirk, and reported the successful evacuation of most of the supporting forces. He resisted pressure to purge the coalition of appeasers, or otherwise indulge in recrimination. He reviewed the forces still available to prevent or repel any attempted invasion, summing up the review as follows:

I have thought it right upon this occasion to give the House and the country some indication of the solid, practical grounds upon which we base our inflexible resolve to continue the war, and I can assure them that our professional advisers of the three Services unitedly advise that we should do so, and that there are good and reasonable hopes of final victory.

He reported messages of support from the Dominions and justified confidence in victory, even if it was not yet clear how that victory could be achieved.

In casting up this dread balance-sheet, contemplating our dangers with a disillusioned eye, I see great reason for intense vigilance and exertion, but none whatever for panic or despair. During the first four years of the last war the Allies experienced,…nothing but disaster and disappointment, and yet at the end their morale was higher than that of the Germans, who had moved from one aggressive triumph to another. During that war we repeatedly asked ourselves the question, “How are we going to win?” and no one was able ever to answer it with much precision, until at the end, quite suddenly, quite unexpectedly, our terrible foe collapsed before us.

The peroration – quoted below – even at a moment of great apparent danger to British national survival talks not only of national survival and national interest, but of noble causes (freedom, ‘Christian civilization’, the rights of small nations) for which Britain was fighting and for which Churchill thought the United States should – and given time would – fight.

The peroration – quoted below – even at a moment of great apparent danger to British national survival talks not only of national survival and national interest, but of noble causes (freedom, ‘Christian civilization’, the rights of small nations) for which Britain was fighting and for which Churchill thought the United States should – and given time would – fight.

“.…However matters may go in France or with the French Government or with another French Government, we in this island and in the British Empire will never lose our sense of comradeship with the French people. If we are now called upon to endure what they have suffered we shall emulate their courage, and if final victory rewards our toils they shall share the gains, aye. And freedom shall be restored to all. We abate nothing of our just demands—Czechs, Poles, Norwegians, Dutch, Belgians, all who have joined their causes to our own shall be restored.”