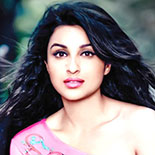 Parineeti Chopra (born October 22, 1988) is an Indian actress who appears in Hindi films.

Chopra has received several awards and nominations, including a Filmfare and National Film Award. Chopra initially aspired to pursue a career in investment banking, but after obtaining a triple honors degree in business, finance and economics from Manchester Business School she returned to India during the 2009 economic recession and joined Yash Raj Films as a public relations consultant. Later, she signed a three-film deal with the company as an actress.