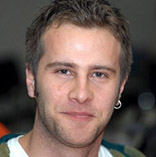 He gained fame and intense fan following as a result of having appeared in his country’s version of the television pop music talent contest, Star Academy and, subsequently, as a variety performer and actor.

A native of Ankara, his father was a soldier and his mother was a police officer. He has one younger sister. Because of his father’s job, Çevik’s family moved a lot. They moved back to Istanbul after the 1999 Marmaris Earthquake. Ozgur Cevik released his first album in 2008.