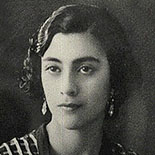 Along with the other members of the Generation of 1950 (the poets who wrote following the Second World War, influenced by César Vallejo and others), she was one of Mexico’s most important literary voices in the last century. Throughout her life, she wrote eloquently about issues of cultural and gender oppression, and her work has influenced feminist theory and cultural studies. Though she died young, she opened the door of Mexican literature to women, and left a legacy that still resonates today.

We kill that we love. The rest never lived.
No one is as close to us. No other is so hurt
by forgetfulness, absence, mere nothingness.
We kill that we love. Enough choking breath,
of breathing through another’s lungs!
The air is not enough
for both, nor the earth
for our bodies entwined.
Hope’s ration is small
and sorrow cannot be shared.

Man is made of solitudes,
a deer in flight, bleeding,
pierced by an arrow.

Ah, but hatred,
its insomniac glare of glass:
repose and menace.

The deer lowers its head to drink,
discovers a tiger image in the water.
The deer drinks the water, the image. It becomes
before devoured (astonished accomplice)
equal to its enemy.

We give life only to what we hate.

THE OTHER
Rosario Castellanos

Why speak the names of gods, stars,
foams of a hidden sea,
pollen of the farthest gardens,
when what hurts us is life itself, when each new day
claws at our guts, when every night falls
writhing, murdered?
When we feel the pain in someone else,
a man we do not know but who is always
present and is the victim
and the enemy and love and everything
we’d need to be whole?
Never lay claim to the dark,
don’t drain the cup of joy in a single sip.
Look around: there is someone else, always someone else.
What he breathes is your suffocation,
what he eats is your hunger.
Dying, he takes with him the purest half of your own death.