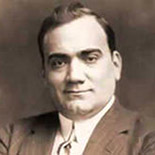 He sang to great acclaim at the major opera houses of Europe and the Americas, appearing in a wide variety of roles from the Italian and French repertoires that ranged from the lyric to the dramatic. Caruso also made approximately 290 commercially released recordings from 1902 to 1920. All of these recordings, which span most of his stage career, are available today on CDs and as digital downloads.

Caruso’s 1904 recording of “Vesti la giubba” from Leoncavallo’s opera Pagliacci was the first sound recording to sell a million copies.