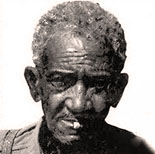 He was a member of the Mississippi Sheiks in concerts, and on a few of their recordings. Carter also managed that group, which included his brother, Lonnie Chatmon, on fiddle and occasionally Sam Chatmon on bass, along with a friend, Walter Vinson, on guitar and lead vocals.