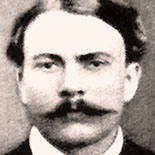 His fame rests on his only published book of poetry, the Canti orfici (“Orphic Songs”), as well as his wild and erratic personality, including his ill-fated love affair with Sibilla Aleramo. He is often seen as an Italian example of a poète maudit.

Campana’s poetry is a new poetry in which sounds, colors and music are blended in a powerful vision. The line is undefined, an expressive articulation of monotony, but at the same time full of dramatic images of annihilation and purity. The title of Campana’s only published work alludes to the Orphic hymns, a literary genre developed in ancient Greece between the second and third century AD and characterized by a non-classical theogony. Also prayers to the gods (especially the god Phanes) are characterized by spells to prevent evil and misfortune.

One of the major themes of Campana, which is present at the beginning of the “Orphic Songs” in the early prose parts – “The Night”, “Journey and Return” – is the obscurity between dream and wakefulness. Adjectives and adverbs return with the repetitive insistence of a dreamer’s speech: a dream, however, that is interrupted by startling shifts in tone (as in the poem “The Skylight”). In the second part – the nocturne of “Genoa”, all the basic mythic figures and scenes that will preoccupy Campana return: port cities, barbaric mother figures, enormous prostitutes, windy plains, the captive teenager. Even in his prose poems, the use of repetition, superlatives, and keywords, as well as the effect of resonance in prepositions, create a strong scene.

To the spectral garden the laurel muted
Of its green garlands
To the autumnal land
A final salute!
To the arid slopes
Red unforgiving in the extreme sun
Faraway life cries out
In a riot of raucous noises:
Cries out to the sun’s dying hour
That sheds blood on the flowers.
A fanfare is heard
Heartbreakingly rising: the river hides in
The golden sands: in the silence
The white statues at the side of bridges
Stand upturned: and already things are no more.
And from the deep silence a chorus
Of tenderness and grandeur
Seems to rise and to strain towards my balcony:
And in the laurel’s scent
In the laurel’s sharp languishing scent
Among statues immortal in twilight
She appears to me – she is present.

You brought me a little seaweed
In your hair, and a wind odor
That came in from hundreds of miles away and arrives
Heavy with meaning, smuggled in your tanned skin:
-O the divine
Simplicity of your acrobat’s body-
Not love not spasm, but something untouchable,
Necessity’s ghost that walks aimlessly
Serene and ineluctable through the soul
And unties it with joy, as though under a sweet spell,
So that the desert wind
Can carry it out through infinity.
How small the world is
and how light it is in your hands.