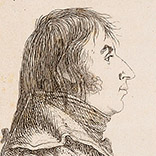 Gaetano Majorano (April 12, 1710 – January 31, 1783) was an Italian castrato and opera singer, who took his stage name Caffarelli from Domenico Caffaro, his patron. Like Farinelli, Caffarelli was a student of Nicola Porpora.

Caffarelli was born in Bitonto. He was one of the rare documented cases of a child so enamored of singing that he asked to be castrated. When aged ten, he was given the income from two vineyards owned by his grandmother, so that he could study grammar and, especially, music: “to which he is said to have a great inclination, desiring to have himself castrated and become an eunuch”. He became the favourite pupil of his master Porpora, of whom it is said that, having kept the young Caffarelli working from one sheet of exercises for six years, he eventually declared: “Go, my son: I have no more to teach you. You are the greatest singer in Europe”.

Caffarelli was notorious for his unpredictability and displays of temperament, both on and off stage. On stage he is reputed to have sung his own preferred versions irrespective of what his colleagues were doing, mimicking them while they sang their solos and sometimes conversing with members of the public in their boxes during the same. Off stage his pugnacity and fierce demeanor led to his willingness to fight duels under little provocation. Such behavior led to spells of house arrest and imprisonment for assault and for misconduct during performances. Most infamously he completely humiliated of a prima donna during a performance of Hasse’s Antigono in 1745. On the other hand, with Handel, also a famously fiery character, he seems to have been able to coexist on a peaceable basis, perhaps due to the fantastic sums of money the composer paid him for his work.

Time, furthermore, seemed to soften Caffarelli. In the latter years of his life he donated extensively to charity, and when Burney met the singer then he was impressed by his politeness. He died in Naples.