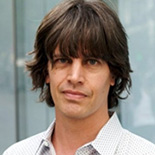 His work has been in anthologies edited by Billy Collins, Garrison Keillor, and Agha Shahid Ali, has been regularly featured on NPR’s Writers Almanac, and has earned him a individual artist fellowship from the New York Foundation for the arts.

TUESDAY 9:00 AM
Denver ButsonA man standing at the bus stop
reading the newspaper is on fire
Flames are peeking out
from beneath his collar and cuffs
His shoes have begun to melt

It takes the three some time
to board the bus
what with the flames
and water and ice
But when they finally climb the stairs
and take their seats
the driver doesn’t even notice
that none of them has paid
because he is tortured
by visions and is wondering
if the man who got off at the last stop
was really being mauled to death
by wild dogs.