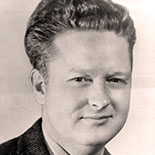 Born in the South Bronx, New York, Bushmiller was the son of immigrant parents, Ernest George Bushmiller and Elizabeth Hall. His father was an artist, vaudevillian and bartender. Bushmiller quit school at 14 to work as a copy boy at the New York World newspaper, while attending evening art classes at the National Academy of Design. He ran errands for the staff cartoonists and was given occasional illustration assignments, including a Sunday feature by Harry Houdini.

Early in 1925, cartoonist Larry Whittington, creator of the comic strip Fritzi Ritz, left to produce another strip, Mazie the Model. Bushmiller then took over Fritzi Ritz, ghostwriting it, before eventually taking over officially. Bushmiller’s name did not appear on the strip until May 1926. He expanded to a Sunday strip on October 6, 1929. Bushmiller had already been producing a comic strip for the New York Evening Graphic titled Mac the Manager.

The character of Fritzi was modeled after Bushmiller’s fiance, Abby Bohnet, the daughter of a train conductor. The couple, who married July 9, 1930, had no children. In 1931, they headed for Hollywood, where Bushmiller wrote gags for Harold Lloyd’s Movie Crazy, continuing to draw Fritzi Ritz at the same time. A year later, they returned to the Bronx. 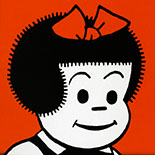 Bushmiller introduced Nancy, Fritzi’s niece, to the strip on January 2, 1933. The character proved popular, so she appeared more often. As Aunt Fritzi was seen less frequently, the strip was eventually retitled Nancy in 1938. The popular strip was translated into various languages, including Italian, German, Swedish and Norwegian. Phil Fumble was a Bushmiller strip which ran from 1932 through 1938.

Bushmiller started working each day about 2pm, and he often sat at his drawing table well into the early morning hours of the next day. He usually began a strip with the last panel and then worked back toward the first panel.

Bushmiller, one of the founding members of the National Cartoonists Society, received its Humor Comic Strip Award and its Reuben Award in 1976 for his work on Nancy. In 2011, Bushmiller was listed as a Judges’ Choice for The Will Eisner Award Hall of Fame. 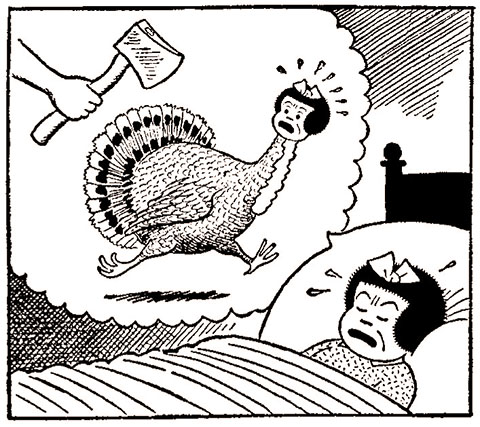