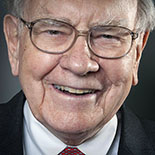 Buffett is called the “Wizard of Omaha”, “Oracle of Omaha”, or the “Sage of Omaha” and is noted for his adherence to the value investing philosophy and for his personal frugality despite his immense wealth. Buffett is also a notable philanthropist, having pledged to give away 99 percent of his fortune to philanthropic causes, primarily via the Gates Foundation. On April 11, 2012, he was diagnosed with prostate cancer, for which he successfully completed treatment in September 2012.