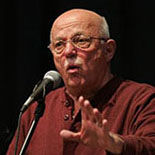 David Wolf Budbill (June 13, 1940 – September 25, 2016) was an American poet and playwright. He was the author of eight books of poems, eight plays, a novel, a collection of short stories, a children’s picture book, and dozens of essays.

Tomorrow
we are
bones and ash,
the roots of weeds
poking through
our skulls.

Drunk on music,
who needs wine?

Come on,
Sweetheart,
let’s go dancing
while we still
have feet.

WHAT I HEARD
David Budbill

Don’t touch that. And stop your whining too.
Stop it. I mean it. You know I do.
If you don’t stop, I’ll give you fucking something
to cry about right here
and don’t you think I won’t either.

So she did. She slapped him across the face.
And you could hear the snap of flesh against flesh
half-way across the store. Then he wasn’t whining anymore.
Instead, he wept. His little body heaved and shivered and wept.
He was seven or eight. She was maybe thirty.
Above her left breast, the pin said: Nurse’s Aide.

Now they walk hand in hand down the aisle
between the tables piled with tennis shoes
and underpants and plastic bags of socks.

Stop that crying now I say
or I’ll give you another little something
like I did before.

That’s better. That’s a whole lot better.
You know you can’t do that with me.
You’re with your mother now.