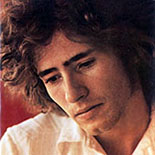 Tim’s music and style changed considerably through the years; his first album (1966) was mostly folk, but his subsequent albums incorporated jazz, psychedelia, funk, soul, avant-garde and an evolving “voice as instrument” sound. Though he did not find commercial success during his lifetime, Buckley is admired by later generations for his innovation as a musician and vocal ability. He died at age 28, leaving behind his sons Taylor and Jeff.

Long afloat on shipless oceans
I did all my best to smile
‘Til your singing eyes and fingers
Drew me loving to your isle
And you sang
Sail to me, sail to me
Let me enfold you
Here I am, here I am