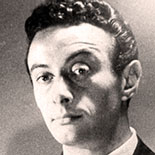 Bruce was renowned for his open, free-style and critical form of comedy which integrated satire, politics, religion, sex, and vulgarity.

His private life was marked by struggles with personal demons and efforts to prevent his wife from working as a stripper. His 1964 conviction in an obscenity trial was followed by a posthumous pardon, the first in New York State history, by then-Governor George Pataki in 2003. He paved the way for future outspoken counterculture-era comedians, and his trial for obscenity, in which – after being forced into bankruptcy – he was eventually pardoned, is seen as a landmark trial for freedom of speech in the US.