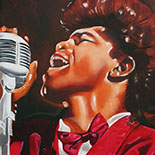 The founding father of funk music and a major figure of 20th-century popular music and dance, he is often referred to as “The Godfather of Soul”. In a career that spanned six decades, Brown influenced the development of several music genres.