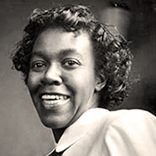 She won the Pulitzer Prize for Poetry in 1950 and was appointed Poet Laureate of Illinois in 1968 and Poet Laureate Consultant in Poetry to the Library of Congress in 1985.

In 1968 she was named Poet Laureate for the state of Illinois, and from 1985-86 she was Consultant in Poetry to the Library of Congress. She also received an American Academy of Arts and Letters award, the Frost Medal, a National Endowment for the Arts award, the Shelley Memorial Award, and fellowships from The Academy of American Poets and the Guggenheim Foundation.

We real cool. We
Left school. We

Lurk late. We
Strike straight. We

Sing sin. We
Thin gin. We

Abortions will not let you forget.
You remember the children you got that you did not get,
The damp small pulps with a little or with no hair,
The singers and workers that never handled the air.
You will never neglect or beat
Them, or silence or buy with a sweet.
You will never wind up the sucking-thumb
Or scuttle off ghosts that come.
You will never leave them, controlling your luscious sigh,
Return for a snack of them, with gobbling mother-eye.

I have heard in the voices of the wind the voices of my dim killed children.
I have contracted. I have eased
My dim dears at the breasts they could never suck.
I have said, Sweets, if I sinned, if I seized
Your luck
And your lives from your unfinished reach,
If I stole your births and your names,
Your straight baby tears and your games,
Your stilted or lovely loves, your tumults, your marriages, aches, and your deaths,
If I poisoned the beginnings of your breaths,
Believe that even in my deliberateness I was not deliberate.
Though why should I whine,
Whine that the crime was other than mine?—
Since anyhow you are dead.
Or rather, or instead,
You were never made.
But that too, I am afraid,
Is faulty: oh, what shall I say, how is the truth to be said?
You were born, you had body, you died.
It is just that you never giggled or planned or cried.