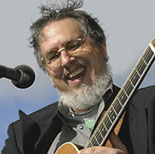 An eclectic artist, Bromberg plays bluegrass, blues, folk, jazz, country and western, and rock and roll equally well. He is known for his quirky, humorous lyrics, and the ability to play rhythm and lead guitar at the same time.

Bromberg has played with many famous musicians, including Jerry Jeff Walker, Willie Nelson, Jorma Kaukonen, Jerry Garcia, Rusty Evans (The Deep) and Bob Dylan. He co-wrote the song “The Holdup” with former Beatle George Harrison, who played on Bromberg’s self-titled 1972 album. In 2008, he was nominated for a Grammy Award.