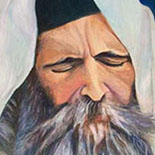 Nachman of Breslov (also known as Reb Nachman of Bratslav, Reb Nachman Breslover, Nachman from Uman (April 4, 1772 – October 16, 1810), was the founder of the Breslov Hasidic movement.

Rebbe Nachman, a great-grandson of the Baal Shem Tov, breathed new life into the Hasidic movement by combining the esoteric secrets of Judaism (the Kabbalah) with in-depth Torah scholarship. He attracted thousands of followers during his lifetime and his influence continues until today through many Hasidic movements such as Breslov Hasidism. Rebbe Nachman’s religious philosophy revolved around closeness to God and speaking to God in normal conversation “as you would with a best friend.” The concept of hitbodedut is central to his thinking.

In his short life, Rebbe Nachman achieved much acclaim as a teacher and spiritual leader, and is considered a seminal figure in the history of Hasidism. His contributions to Hasidic Judaism include the following:

Previous
Next
More Nachman of Breslov