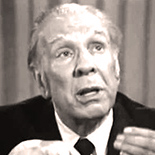 His work embraces the “character of unreality in all literature”. His most famous books, Ficciones (1944) and The Aleph (1949), are compilations of short stories interconnected by common themes such as dreams, labyrinths, libraries, mirrors, animals, fictional writers, philosophy, religion and God.

Borges’ works have contributed to philosophical literature and also to both the fantasy and magical realism genres. The genre of magical realism reacted against the dominant realism and naturalism of the nineteenth century. Critic Ángel Flores, the first to use the term, considers the beginning of the movement to be the release of Borges’ A Universal History of Infamy (1935). Scholars have also suggested that Borges’s progressive blindness helped him to create innovative literary symbols through imagination. His late poems dialogue with such cultural figures as Spinoza, Camões, and Virgil.

In 1914 his family moved to Switzerland, where he studied at the Collège de Genève. The family travelled widely in Europe, including stays in Spain. On his return to Argentina in 1921, Borges began publishing his poems and essays in surrealist literary journals. He also worked as a librarian and public lecturer. In 1955 he was appointed director of the National Public Library and professor of Literature at the University of Buenos Aires. In 1961 he came to international attention when he received the first ever Prix International, sharing the award with Samuel Beckett. In 1971 he won the Jerusalem Prize. His work was translated and published widely in the United States and in Europe. Borges himself was fluent in several languages. Borges dedicated his final work, The Conspirators, to the city of Geneva, Switzerland, and it was there, in 1986, that he chose to die.

His international fame was consolidated in the 1960s, aided by the “Latin American Boom” and the success of Gabriel García Márquez’s One Hundred Years of Solitude. Writer and essayist J. M. Coetzee said of him: “He, more than anyone, renovated the language of fiction and thus opened the way to a remarkable generation of Spanish American novelists.”

Was there a Garden or was the Garden a dream?Amid the fleeting light, I have slowed myself and queried,
Almost for consolation, if the bygone period
Over which this Adam, wretched now, once reigned supreme,

Might not have been just a magical illusion
Of that God I dreamed. Already it’s imprecise
In my memory, the clear Paradise,
But I know it exists, in flower and profusion,

Although not for me. My punishment for life
Is the stubborn earth with the incestuous strife
Of Cains and Abels and their brood; I await no pardon.

Yet, it’s much to have loved, to have known true joy,
To have had — if only for just one day —
The experience of touching the living Garden.

I know the things I’ve lost are so many that I could not begin to count them
and that those losses
now, are all I have.
I know that I’ve lost the yellow and the black and I think
of those unreachable colors
as those that are not blind can not.
My father is dead, and always stands beside me.
When I try to scan Swinburne’s verses, I am told, I speak with my father’s voice.
Only those who have died are ours, only what we have lost is ours.
yet Ilium vanished, yet Illium in Homer’s verses.
Israel was Israel when it became an ancient nostalgia.
Every poem, in time, becomes an elegy.
The women who left us are ours, free as we are from misgivings,
from anguish, from the disquiet and dread of hope.
There are no paradises other than lost paradises.