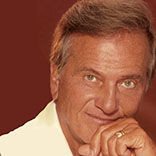 He was a successful pop singer in the United States during the 1950s and early 1960s. He sold over 45 million albums, had 38 Top 40 hits and appeared in more than 12 Hollywood movies.

According to Billboard, Boone was the second biggest charting artist of the late 1950s, behind only Elvis Presley but ahead of Ricky Nelson and The Platters, and was ranked at No. 9—behind The Rolling Stones and Paul McCartney but ahead of artists such as Aretha Franklin and The Beach Boys—in its listing of the Top 100 Top 40 Artists 1955–1995. Boone still holds the Billboard record for spending 220 consecutive weeks on the charts with one or more songs each week.

At the age of twenty-three, he began hosting a half-hour ABC variety television series, The Pat Boone Chevy Showroom, which aired for 115 episodes (1957–1960). Many musical performers, including Edie Adams, Andy Williams, Pearl Bailey and Johnny Mathis made appearances on the show. His cover versions of rhythm and blues hits had a noticeable effect on the development of the broad popularity of rock and roll. In 1955 Elvis Presley was the opening act for a show in Cleveland starring Pat Boone.

As an author, Boone had a No. 1 bestseller in the 1950s (Twixt Twelve and Twenty, Prentice-Hall). In the 1960s, he focused on gospel music and is a member of the Gospel Music Hall of Fame. He continues to perform, and speak as a motivational speaker, a television personality, and a conservative political commentator.