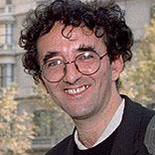 In 1999, Bolaño won the Rómulo Gallegos Prize for his novel Los detectives salvajes (The Savage Detectives), and in 2008 he was posthumously awarded the National Book Critics Circle Award for Fiction for his novel 2666, which was described by board member Marcela Valdes as a “work so rich and dazzling that it will surely draw readers and scholars for ages.” He has been described by the New York Times as “the most significant Latin American literary voice of his generation.”

ERNESTO CARDENAL AND I
Roberto Bolaño

I was out walking, sweaty and with hair plastered
to my face
when I saw Ernesto Cardenal approaching
from the opposite direction
and by way of greeting I said:
Father, in the Kingdom of Heaven
that is communism,
is there a place for homosexuals?
Yes, he said.
And for impenitent masturbators?
For sex slaves?
For sex fools?
For sadomasochists, for whores, for those obsessed
with enemas,
for those who can’t take it anymore, those who really truly
can’t take it anymore?
And Cardenal said yes.
And I raised my eyes
and the clouds looked like
the pale pink smiles of cats
and the trees cross-stitched on the hill
(the hill we’ve got to climb)
shook their branches.
Savage trees, as if saying
some day, sooner rather than later, you’ll have to come
into my rubbery arms, into my scraggly arms,
into my cold arms. A botanical frigidity
that’ll stand your hair on end.

MY GIFT TO YOURoberto Bolano

My gift to you will be an abyss, she said,
but it will be so subtle you’ll perceive it
only after many years have passed
and you are far from Mexico and me.
You’ll find it when you need it most,
and that won’t be
the happy ending,
but it will be an instant of emptiness and joy.
And maybe then you’ll remember me,
if only just a little.