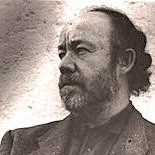 Alberto Blanco is considered one of Mexico’s most important poets.

Born in Mexico City on February 18, 1951, he spent his childhood and adolescence in that city, and he studied chemistry at the Universidad Iberoamericana and philosophy at the Universidad Nacional Autónoma de México. For two years, he pursued a Master’s Degree in Asian Studies, specializing in China, at El Colegio de México. Blanco was first published in a journal in 1970. He was co-editor and designer of the poetry journal El Zaguan (1975-1977), and a grant recipient of the Centro Mexicano de Escritores (Mexican Center of Writers, 1977), el Instituto Nacional de Bellas Artes (the National Institute of Fine Arts, 1980), and the Fondo Nacional para la Cultura y las Artes (National Fund for Culture and Arts, 1990).

They talk all day
and when it starts to get dark
they lower their voices
to converse with their own shadows
and with the silence.

They are like everybody
—the parakeets—
all day chatter,
and at night bad dreams.

With their gold rings
on their clever faces,
brilliant feathers
and the heart restless
with speech…

They are like everybody,
—the parakeets—
the ones that talk best
have separate cages.