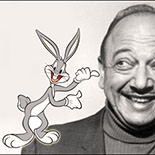 Although he began his more than six-decade-long career performing in radio, Blanc is best remembered for his work with Warner Bros. as the voices of Bugs Bunny, Daffy Duck, Porky Pig, Tweety Bird, Sylvester the Cat, Yosemite Sam, Foghorn Leghorn, Marvin the Martian, Pepé Le Pew, Speedy Gonzales, Wile E. Coyote, the Tasmanian Devil and many of the other characters from the Looney Tunes and Merrie Melodies theatrical short films, during the golden age of American animation.

He later worked for Hanna-Barbera’s television productions, most notably as the voices of Barney Rubble in The Flintstones and Mr. Spacely in The Jetsons. Blanc was also a regular performer on The Jack Benny Program in both its radio and television formats (among various other radio and TV programs), and was the original voice of Woody Woodpecker for Universal Pictures.

Having earned the nickname “The Man of a Thousand Voices”, Blanc is regarded as one of the most influential people in the voice acting industry.