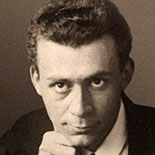 In 1956, he was nominated to the Nobel Prize for Literature on the proposal of Bazil Munteanu of France and Rosa del Conte of Italy, but it seems the idea was of Mircea Eliade. Still, the Romanian Communist government sent two emissaries to Sweden to protest the nomination, because Blaga was considered an idealist philosopher, and his poems were forbidden until 1962. He died of cancer on May 6, 1961, and is buried in Lancrăm, Romania. The University of Sibiu bears his name today.

I will not crush the world’s corolla of wonders
and I will not kill
with reason
the mysteries I meet along my way
in flowers, eyes, lips and graves.
The light of others
drowns the deep magic hidden
in the profound darkness.
I increase the world’s enigma
with my light
much as the moon with its white beams
does not diminish but increase
the shimmering mystery of night—
I enrich the darkening horizon
with chills of the great secret.
All that is hard to know
becomes a greater riddle
under my very eyes
because I love alike
flowers, lips, eyes and graves.

Such a deep silence surrounds me, that I think I hear
moonbeams striking on the windows.

In my chest,
a strange voice is awakens
and a song plays inside me
a longing that is not mine.

They say that ancestors, dead before their time,
with young blood still in their veins,
with great passion in their blood,
with the sun still burning in their blood
come,
come to continue to live
within us
their unfinished lives.

Such a deep silence surrounds me, that I think I hear
moonbeams striking on the windows.

O, who knows, soul of mine, in which chest you will sing
you also, after centuries,
in soft ropes of silence,
on harps of obscurity – the drowned longing
and the pleasure of living torn? Who knows?
Who knows?