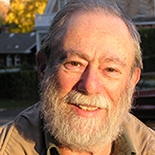 Marvin Bell (born August 3, 1937) is an American poet and teacher who was the first Poet Laureate of the state of Iowa.

Often one wonders what the snake does all day in its pit
to so successfully keep away hands
and be left alone like a solitary zipper
encircling some space from which it has squeezed out all the light
it would seem,
as if no creature could so love the dark during the day.
And everyone knows about the kiss of the snake.
And everyone knows about the eyes of the snake.
In its mouth is the blue light of old milk.
On its tongue is a map of red rivers.
It knows your body, your own body, like its own.
It begins with your foot, lurking in a boot,
and ends in the venomous sweat of the heart
if you bother it. But whoever leaves alone
whatever in nature wishes not to be disturbed,
he or she will seem like a god,
so unlike a human being,
even to a snake.

AROUND US
Marvin Bell

We need some pines to assuage the darkness
when it blankets the mind,
we need a silvery stream that banks as smoothly
as a plane’s wing, and a worn bed of
needles to pad the rumble that fills the mind,
and a blur or two of a wild thing
that sees and is not seen. We need these things
between appointments, after work,
and, if we keep them, then someone someday,
lying down after a walk
and supper, with the fire hole wet down,
the whole night sky set at a particular
time, without numbers or hours, will cause
a little sound of thanks–a zipper or a snap—
to close round the moment and the thought
of whatever good we did.

You are not beautiful, exactly.
You are beautiful, inexactly.
You let a weed grow by the mulberry
and a mulberry grow by the house.
So close, in the personal quiet
of a windy night, it brushes the wall
and sweeps away the day till we sleep.

A child said it, and it seemed true:
“Things that are lost are all equal.”
But it isn’t true. If I lost you,
the air wouldn’t move, nor the tree grow.
Someone would pull the weed, my flower.
The quiet wouldn’t be yours. If I lost you,
I’d have to ask the grass to let me sleep.

HE HAD A GOOD YEAR
Marvin Bell

while he was going blind. Autumnal light
gave to ordinary things the turning
beauty of leaves, rich with their losing.
A shade of yellow, that once stood opaque
in the rainbow of each glitzy morning,
now became translucent, as if the sun
broke against his own window. As for white,
it was now too much of everything,
as the flat deprivations of the color black
moved farther away: echoes of a surface
unseen and misremembered. I must tell you
how he managed as the lights went slowly out
to look inside the top glow of each object
and make in his mind a spectrum of inner
texture, of an essence isolate from the
nervous trembling of things struck by light.
“Ah, if God were only half the man he is,
” he said, “he would see things this way.”