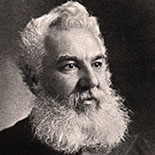 Alexander Graham Bell (March 3, 1847 – August 2, 1922) was an eminent scientist, inventor, engineer and innovator who is credited with inventing the first practical telephone.

Bell’s father, grandfather, and brother had all been associated with work on elocution and speech, and both his mother and wife were deaf, profoundly influencing Bell’s life’s work. His research on hearing and speech further led him to experiment with hearing devices which eventually culminated in Bell being awarded the first US patent for the telephone in 1876. In retrospect, Bell considered his most famous invention an intrusion on his real work as a scientist and refused to have a telephone in his study.

Many other inventions marked Bell’s later life, including groundbreaking work in optical telecommunications, hydrofoils and aeronautics. In 1888, Bell became one of the founding members of the National Geographic Society. He has been described as one of the most influential figures in human history.

Thomas Augustus Watson (January 18, 1854 – December 13, 1934) was an assistant to Alexander Graham Bell, notably in the invention of the telephone in 1876. He is best known because his name was one of the first words spoken over the telephone. “Mr. Watson – Come here – I want to see you.” were the first words Bell said using the new invention, according to Bell’s laboratory notebook. There is some dispute about the actual words used, as Thomas Watson, in his own voice, remembered it as “Mr. Watson – Come here – I want you,” in a film made for Bell Labs in 1931 which is referenced below in “The Engines of our Ingenuity.”