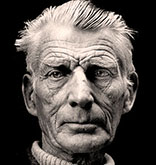 Beckett lived in Paris for most of his adult life and wrote in both English and French. His work offers a bleak, tragicomic outlook on human nature, often coupled with black comedy and gallows humor.

Beckett was awarded the 1969 Nobel Prize in Literature “for his writing, which—in new forms for the novel and drama—in the destitution of modern man acquires its elevation”.