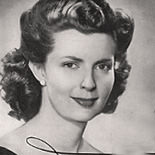 Eula Beal Garnett (January 25, 1919 – July 29, 2008) professionally billed as Eula Beal, was an American opera contralto. During her relatively short touring career, she performed with distinguished collaborators not only in concert on the US West Coast but also in Concert Magic, a 1947 film billed as “the first motion picture concert.”