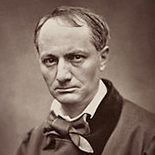 His most famous work, Les Fleurs du mal (The Flowers of Evil), expresses the changing nature of beauty in modern, industrializing Paris during the 19th century. Baudelaire’s highly original style of prose-poetry influenced a whole generation of poets including Paul Verlaine, Arthur Rimbaud and Stéphane Mallarmé among many others. He is credited with coining the term “modernity” (modernité) to designate the fleeting, ephemeral experience of life in an urban metropolis, and the responsibility art has to capture that experience.

In 1862, Baudelaire began to suffer nightmares and increasingly bad health. He left Paris for Brussels in 1863 to give a series of lectures, but suffered from several strokes that resulted in partial paralysis. On August 31, 1867, at the age of forty-six, Charles Baudelaire died in Paris. Although doctors at the time didn’t mention it, it is likely that syphilis caused his final illness.

My dear, your eyes are weary;
Rest them a little while.
Assume the languid posture
Of pleasure mixed with guile.
Outside the talkative fountain
Continues night and day
Repeating my warm passion
In whatever it has to say.

Thus your soul ignited
By pleasure’s lusts and needs
Sprays into heaven’s reaches
And dreams of fiery deeds.
Then it brims over, dying,
And languorous, apart,
Drains down some slope and enters
The dark well of my heart.

Love may arise from a generous sentiment—namely
the liking for prostitution;
but it soon becomes corrupted
by the liking of ownership.
Love seeks to escape from itself,
to mingle itself with the victim,
as a victor nation with the vanquished—
and yet at the same time
to retain the privileges of a conqueror.
The sensual pleasures of a man who keeps a mistress
have in them something both of the angel
and the conqueror.
Charity and ferocity.

O you, whom night enhances,
How sweet here at your breasts
To hear the eternal sadness
Of water that never rests.
O moon, o singing fountain,
O leaf-thronged night above,
You are the faultless mirrors
Of my sweet, bitter love.