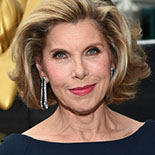 Christine Jane Baranski (born May 2, 1952) is an American stage and screen actress.

She won Tony Awards for her work in the original Broadway productions of The Real Thing in 1984 and Rumors in 1989, both for Best Featured Actress in a Play. She went on to win the 1995 Emmy Award for Outstanding Supporting Actress in a Comedy Series for her role as Maryanne Thorpe in the sitcom Cybill (1995–98).