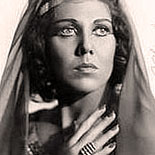 Bampton began her professional career performing mostly minor roles from the mezzo-soprano repertoire in 1929 but later switched to singing primarily leading soprano roles in 1937 until her retirement from the opera stage in 1963.

Bampton had a lengthy and fruitful partnership with the Metropolitan Opera in New York City, singing there for eighteen consecutive seasons between 1932 and 1950. Her greatest successes were from the dramatic soprano repertoire, particularly in operas by Richard Wagner. Not a stranger to the concert repertoire, Bampton was particularly known for her performances of works by Alban Berg, Arnold Schoenberg, and her friend Samuel Barber, notably having performed their compositions with the composers accompanying her in concert.