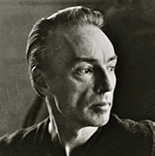 George Balanchine (born Giorgi Balanchivadze) (January 22, 1904 – April 30, 1983) was one of the 20th century’s most prolific and famous choreographers. Styled as the father of American ballet, he co-founded the New York City Ballet and remained its ballet master for more than 35 years. He was a choreographer known for his musicality; he expressed music with dance and worked extensively with leading composers of his time like Igor Stravinsky.