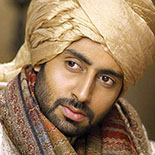 Abhishek is the son of veteran actors Amitabh Bachchan and Jaya Bachchan. He made his film debut in the war drama Refugee (2000), which did not do very well at the box office, but earned him appreciation from critics. For the next few years, Bachchan starred in a series of unsuccessful films that failed to propel his career forward. Bachchan then established himself as a leading actor of Hindi cinema with the blockbuster action thriller Dhoom (2004).