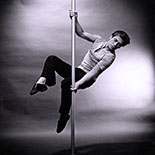 He is considered to have been one of modern ballet’s greatest performers, and the first French dancer to gain international acclaim. Babilée has been called the “enfant terrible of dance.”