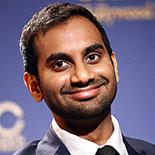 Aziz Ansari (born February 23, 1983) is an American actor and comedian.

Ansari is known for his roles as Tom Haverford on the NBC series Parks and Recreation (2009-2015) and as Dev Shah on the Netflix series Master of None, which debuted in 2015 and which Ansari created, writes, and stars in — and which The New York Times called “the year’s best comedy straight out of the gate.”

Ansari began his career performing standup comedy in New York City during the summer of 2000 while attending New York University. In 2007, he created and starred in the MTV sketch comedy show Human Giant, which ran for two seasons. This led to acting roles in feature films, including Funny People; I Love You, Man; Observe and Report; and 30 Minutes or Less.