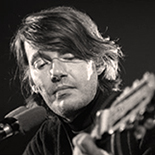 Known for his sympathies towards anarchism, and pacifism, his songs often featured marginalized and rebellious people, gypsies, prostitutes and knaves, and attacked the Catholic Church hierarchy hypocrisies.

Artistically active for almost 40 years and the author of thirteen studio albums, he is renowned for the quality of his lyrics and often considered a poet. He contributed to the valorization of the languages of Italy, most notably Ligurian and, to a lesser extent, Sardinian, Gallurese and Neapolitan. Following his early death several streets, places, parks, schools and public libraries were named after him.