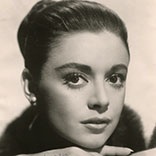 Anna Maria Alberghetti (born May 15, 1936) is an Italian operatic singer and actress.

Alberghetti was a child prodigy. Her father was an opera singer and concertmaster of the Rome Opera Company. Her mother was a pianist. At age six, Anna Maria sang in a concert on the Isle of Rhodes with a 100-piece orchestra. She performed at Carnegie Hall in New York at the age of 13.

Alberghetti appeared twice on the cover of Life magazine. She appeared on The Ed Sullivan Show more than 50 times. She guest starred in 1957 on NBC’s The Gisele MacKenzie Show. That same year, she performed in the premiere episode of The Pat Boone Chevy Showroom on ABC.

Alberghetti co-starred with Dean Martin in 1957’s Ten Thousand Bedrooms and with Jerry Lewis in Cinderfella. In 1959, the 22-year-old Alberghetti played the lead in “The Conchita Vasquez Story” of NBC’s Wagon Train.

Alberghetti has toured in many theatrical productions and continues with her popular one-woman cabaret act. She had roles in a pair of 2001 films, The Whole Shebang and Friends & Family.