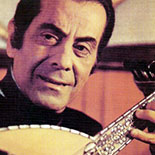 Having immigrated to Egypt in childhood, Elattrache embarked on a highly successful career spanning more than four decades – recording 500 songs and starring in 31 movies. Sometimes referred to as “King of the Oud”, he is one of the most important figures of 20th-century Arab music.