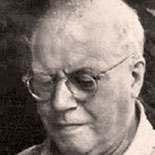 Aiken avoided military service during World War I by claiming that, as a poet, he was part of an “essential industry”. During the 1920s and 1930s Aiken traveled extensively between England and North America and married three times, once to Jessie McDonald, then to Clarissa M. Lorenz and later the artist Mary Hoover.

Most of Aiken’s poetry reflects an intense interest in psychoanalysis and the development of identity. Of the many influences Aiken acknowledged, the writings of Freud, William James, Edgar Allan Poe, and the French Symbolists are most evident in his work.

Aiken was Poetry Consultant to the Library of Congress (now the U.S. Poet Laureate) from 1950-52. His other honors included the Bollingen Prize, the Gold Medal in Poetry from the American Academy of Arts and Letters, and a National Medal for Literature.

Suddenly, after the quarrel, while we waited,
Disheartened, silent, with downcast looks, nor stirred
Eyelid nor finger, hopeless both, yet hoping
Against all hope to unsay the sundering word:

While all the room’s stillness deepened, deepened about us
And each of us crept his thought’s way to discover
How, with as little sound as the fall of a leaf,
The shadow had fallen, and lover quarreled with lover;

And while, in the quiet, I marveled—alas, alas—
At your deep beauty, your tragic beauty, torn
As the pale flower is torn by the wanton sparrow—
This beauty, pitied and loved, and now forsworn;

It was then, when the instant darkened to its darkest,—
When faith was lost with hope, and the rain conspired
To strike its gray arpeggios against our heartstrings,—
When love no longer dared, and scarcely desired:

It was then that suddenly, in the neighbor’s room,
The music started: that brave quartette of strings
Breaking out of the stillness, as out of our stillness,
Like the indomitable heart of life that sings

When all is lost; and started from our sorrow,
Tranced from our grief by that diviner grief,
We raised remembering eyes, each looked at other,
Blinded with tears of joy; and another leaf

Fell silently as that first; and in the instant
The shadow had gone, our quarrel became absurd;
And we rose, to the angelic voices of the music,
And I touched your hand, and we kissed, without a word.

She rose among us where we lay.
She wept, we put our work away.
She chilled our laughter, stilled our play;
And spread a silence there.
And darkness shot across the sky,
And once, and twice, we heard her cry;
And saw her lift white hands on high
And toss her troubled hair.

What shape was this who came to us,
With basilisk eyes so ominous,
With mouth so sweet, so poisonous,
And tortured hands so pale?
We saw her wavering to and fro,
Through dark and wind we saw her go;
Yet what her name was did not know;
And felt our spirits fail.

We tried to turn away; but still
Above we heard her sorrow thrill;
And those that slept, they dreamed of ill
And dreadful things:
Of skies grown red with rending flames
And shuddering hills that cracked their frames;
Of twilights foul with wings;

And skeletons dancing to a tune;
And cries of children stifled soon;
And over all a blood-red moon
A dull and nightmare size.
They woke, and sought to go their ways,
Yet everywhere they met her gaze,
Her fixed and burning eyes.

Who are you now, —we cried to her—
Spirit so strange, so sinister?
We felt dead winds above us stir;
And in the darkness heard
A voice fall, singing, cloying sweet,
Heavily dropping, though that heat,
Heavy as honeyed pulses beat,
Slow word by anguished word.

And through the night strange music went
With voice and cry so darkly blent
We could not fathom what they meant;
Save only that they seemed
To thin the blood along our veins,
Foretelling vile, delirious pains,
And clouds divulging blood-red rains
Upon a hill undreamed.

And this we heard: “Who dies for me,
He shall possess me secretly,
My terrible beauty he shall see,
And slake my body’s flame.
But who denies me cursed shall be,
And slain, and buried loathsomely,
And slimed upon with shame.”

And darkness fell. And like a sea
Of stumbling deaths we followed, we
Who dared not stay behind.
There all night long beneath a cloud
We rose and fell, we struck and bowed,
We were the ploughman and the ploughed,
Our eyes were red and blind.

And some, they said, had touched her side,
Before she fled us there;
And some had taken her to bride;
And some lain down for her and died;
Who had not touched her hair,
Ran to and fro and cursed and cried
And sought her everywhere.

“Her eyes have feasted on the dead,
And small and shapely is her head,
And dark and small her mouth,” they said,
“And beautiful to kiss;
Her mouth is sinister and red
As blood in moonlight is.”

Then poets forgot their jeweled words
And cut the sky with glittering swords;
And innocent souls turned carrion birds
To perch upon the dead.
Sweet daisy fields were drenched with death,
The air became a charnel breath,
Pale stones were splashed with red.

Green leaves were dappled bright with blood
And fruit trees murdered in the bud;
And when at length the dawn
Came green as twilight from the east,
And all that heaving horror ceased,
Silent was every bird and beast,
And that dark voice was gone.

Until at dusk, from God knows where,
Beneath dark birds that filled the air,
Like one who did not hear or care,
Under a blood-red cloud,
An aged ploughman came alone
And drove his share through flesh and bone,
And turned them under to mould and stone;
All night long he ploughed.