Diego Marín Aguilera (1757 – 1799) was a Spanish inventor who was an early aviation pioneer. Born in Coruña del Conde, Marín became the head of his household after his father died. Marín was forced to take care of his seven brothers, and worked as an agricultural laborer, tending his animals and fields. Marín spent long afternoons and days herding sheep in the surrounding fields.

Marín devised, early on, several labor-saving devices, including a gadget that improved the functionality of a watermill on the river Arandilla; another that improved the working of a fulling-mill; and another used to improve the cutting of marble in the quarries of Espejón.He also came up with a device with which to whip horses during the process of threshing, and another that made cloth pads.

Marín was inspired by the eagles he spotted while tending his animals and fields: he wanted to build a flying machine. For six years, he worked on one of his own inventions. The machine was built out of wood, iron, cloth, and feathers. He gathered eagle and vulture feathers by setting up special traps on which he placed rotting meat to attract these birds.

Marín made calculations regarding the weight, volume, size, dimensions of the feathers, as well as the weight of the bodies of these birds. He also carefully studied the movement of their wings and tail and constructed, with the assistance of the local blacksmith, Joaquín Barbero, a pair of wrought iron “joints” that moved about like a fan. He also built stirrups for his feet and hand-cranks that controlled the direction of the machine. 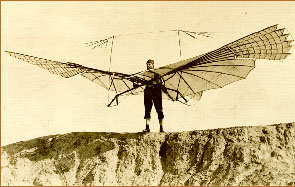 On the night of May 15, 1793, accompanied by the blacksmith Barbero and one of Marín’s sisters, Marín placed his glider on the highest part of the castle of Coruña del Conde. In the light of the full moon, he remarked (roughly): “I’m going to Burgo de Osma, and from there to Soria, and I’ll be back in a couple of days.”

Flapping the wings of the glider, he reached a height of “six or seven varas” (approximately 5 or 6 m) and according to his companions, glided for “431 Castilian varas“, or around 300 to 500 yards. Marín managed to cross the river Arandilla and reached the area known as Heras, where he crash-landed after one of the metal joints broke. Fearing the worst, his companions ran to the spot. Marín was only scratched and bruised, but angry at the blacksmith for failing to weld the joint properly.

Marín suffered further bad luck. The inhabitants of the town, believing him to be a lunatic, heretic, or a fraud, burned his “demonic” flapping-wing creation. Marín lost all hope and, feeling disgraced and deeply depressed, never attempted flight again. He died at the age of 44 in his native town, six years after his attempted flight. Marín left no documentation regarding his inventions and he was buried at the local church.

Called the “father of aviation” in Spain, the Air Force dedicated a monument to him that can be found next to the castle where he took flight. The castle itself was on sale for one euro in 2002 (on the condition that the buyer restore the crumbling building).

Of Marín, the American Institute of Aeronautics and Astronautics writes: “It is impossible to determine how much truth there is to the story of Marín, but it seems that he did achieve some gliding flight, surviving after structural failure and a crash landing. Marín, who had no formal scientific education, was endowed with a special technical ingenuity and is a good example of the ageless human aspiration toward flight.