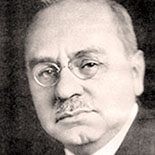 Alfred W. Adler (February 7, 1870 – May 28, 1937) was an Austrian medical doctor, psychotherapist, and founder of the school of individual psychology.

His emphasis on the importance of feelings of inferiority—the inferiority complex—is recognized as isolating an element which plays a key role in personality development. Alfred Adler considered human beings as an individual whole, therefore he called his psychology “Individual Psychology”.

In collaboration with Sigmund Freud and a small group of Freud’s colleagues, Adler was among the co-founders of the psychoanalytic movement and a core member of the Vienna Psychoanalytic Society: indeed, to Freud he was “the only personality there”. He was the first major figure to break away from psychoanalysis to form an independent school of psychotherapy and personality theory, which he called individual psychology because he believed a human to be an indivisible whole, an individuum. He also imagined a person to be connected or associated with the surrounding world.