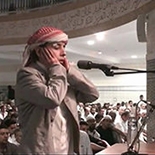 The adhān or azan (as pronounced in Afghanistan, Iran, Pakistan, Bangladesh, India and Turkey), is the Islamic call to prayer, recited by the muezzin at prescribed times of the day.

The root of the word means “to permit”; another derivative of this word is uḏun, meaning “ear”.

Adhan is called out by the muezzin in the mosque five times a day, traditionally from a minaret, summoning Muslims for mandatory (fard) prayers (salah). A second call known as iqama (set up) then summons Muslims to line up for the beginning of the prayers. The main purpose behind the multiple loud pronouncements of adhan in every mosque is to make available to everyone an easily intelligible summary of Islamic belief. It is intended to bring to the mind of every believer and non-believer the substance of Islamic beliefs, or its spiritual ideology. In modern times, loudspeakers have been installed on minarets for this purpose.

Adhan is recited in a loud voice by the Muezzin facing the direction of the Ka’ba in the following words, which are said in the order mentioned:

“Allahu Akbar”
(Allah is Most Great)
“Ash-hadu an la ilaha ill-Allah”
(I bear witness that there is none worthy of being worshiped except Allah)
“Ash-hadu anna Muhammad-ar-Rasoolullah”
(I bear witness that Muhammad is the Apostle of Allah.”
“Hayya ‘alas-Salah”
(Come to prayer)
“Hayya ‘alal-falah”
(Come to Success)
“Allahu Akbar”
(Allah is Most Great)

The following phrase is added after “Hayya ‘alal-falah” the early morning prayers:
“As-salatu khairum minannaum”
(Prayer is better than sleep)
”La ilaha illallah”
(There is no deity except for Allah)

ALLAH IS THE GREATEST