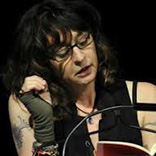 Kim Addonizio was born in Washington DC, the daughter of a former tennis champion and a sports writer. She attended college in San Francisco, earning both her BA and MA from San Francisco State University, and has spent much of her adult life in the Bay Area. She currently lives and teaches workshops in Oakland, California. Addonizio has received numerous awards for her work, including fellowships from the Guggenheim Foundation and the National Endowment for the Arts, a Pushcart Prize, and the John Ciardi Lifetime Achievement Award. Addonizio’s poetry, known for its gritty, street-wise narrators and a wicked sense of wit, has received significant recognition since it first appeared as The Philosopher’s Club (1994), a collection of unflinching poems on subjects ranging from mortality to love. Daniela Gioseffi, writing in the American Book Review, affirmed that Addonizio “is wise and crafty in her observations and her portrayal of sensual love, filial feeling, death or loss.” Gioseffi contended that Addonizio “is most profound when she’s philosophizing about the transient quality of life and its central realization of mortality.”

When he takes off his clothes
I think of a stick of butter being unwrapped,
the milky, lubricious smoothness of it
when it’s taken from the fridge still hard
the way his body is hard, the high
tight pectorals, the new dimes of the nipples pressed
into his chest, the fanning of the muscles underneath.
I look at his arms, shaped as though a knife
has slid along the curves to carve them out,
deltoids, biceps, triceps, I almost can’t believe
that he is human—latissimus dorsi, hip flexors,
gluteals, gastrocnemius—he is so perfectly made.
He stands naked in my bedroom and nothing
has harmed him yet, though he is going
to be harmed. He is going to have a gut one day,
and wiry gray hairs where the soft dark filaments
flow out of him, the cream, of his skin is going
to loosen and separate slowly, over a low steady flame
and he has no idea, as I had no idea,
and I am not going to speak of this to him ever,
I am going to let him stretch out on my bed
so I can take the heavy richness of him in
and in, I am going to have it back the only way I can.

Give me the strongest cheese, the one that stinks best;
and I want the good wine, the swirl in crystal
surrendering the bruised scent of blackberries,
or cherries, the rich spurt in the back
of the throat, the holding it there before swallowing.
Give me the love who yanks open the door
of his house and presses me to the wall
in the dim hallway, and keeps me there until I’m drenched
and shaking, whose kisses arrive by the boatload
and begin their delicious diaspora
through the cities and small towns of my body.
To hell with the saints, with martyrs
of my childhood meant to instruct me
in the power of endurance and faith,
to hell with the next world and its pallid angels
swooning and sighing like Victorian girls.
I want this world. I want to walk into
the ocean and feel it trying to drag me along
like I’m nothing but a broken bit of scratched glass,
and I want to resist it. I want to go
staggering and flailing my way
through the bars and back rooms,
through the gleaming hotels and weedy
lots of abandoned sunflowers and the parks
where dogs are left off their leashes
in spite of the signs, where they sniff each
other and roll together in the grass, I want to
lie down somewhere and suffer for love until
it nearly kills me, and then I want to get up again
and put on that little black dress and wait
for you, yes you, to come over here
and get down on your knees and tell me
just how fucking good I look.

Love me like a wrong turn on a bad road late at night, with no moon and no town anywhere
and a large hungry animal moving heavily through the brush in the ditch.
Love me with a blindfold over your eyes and the sound of rusty water
blurting from the faucet in the kitchen, leaking down through
the floorboards to hot cement. Do it without asking,
without wondering or thinking anything, while the machinery’s
shut down and the watchman’s slumped asleep before his small TV
showing the empty garage, the deserted hallways, while the thieves slice through
the fence with steel clippers. Love me when you can’t find
a descent restaurant open anywhere, when you’re alone in a glaring diner
with two nuns arguing in the back booth, when your eggs are greasy
and your hash browns underdone. Snick the buttons off the front of my dress
and toss them one by one into the pond where carp lurk just beneath the surface,
their cold fins waving. Love me on the hood of a truck no one’s driven
in years, sunk to its fenders in weeds and dead sunflowers;
and in the lilies, your mouth on my white throat, white turtles drag
their bodies through slick mud, through the footprints of coots and ducks.
Do it when no one’s looking, when the riots begin and the planes open up,
when the bus leaps the curb and the driver hits the brakes and the pedal sinks to the floor,
while someone hurls a plate against the wall and picks up another,
love me like a freezing shot of vodka, like pure agave, love me
when you’re lonely, when we’re both too tired to speak, when you don’t believe
in anything, listen, there isn’t anything, it doesn’t matter; lie down
with me and close your eyes, the road curves here, I’m cranking up the radio
and we’re going, we won’t turn back as long as you love me,
as long as you keep on doing it exactly like that.

WHAT THE DEAD FEAR
Kim Addonizio

On winter nights, the dead
see their photographs slipped
from the windows of wallets,
their letters stuffed in a box
with the clothes for Goodwill.
No one remembers their jokes,
their nervous habits, their dread
of enclosed places.
In these nightmares, the dead feel
the soft nub of the eraser
lightening their bones. They wake up
in a panic, go for a glass of milk
and see the moon, the fresh snow,
the stripped trees.
Maybe they fix a turkey sandwich,
or watch the patterns on the TV.
It’s all a dream anyway.
In a few months
they’ll turn the clocks ahead,
and when they sleep they’ll know the living
are grieving for them, unbearably lonely
and indifferent to beauty. On these nights
the dead feel better. They rise
in the morning, and when the cut
flowers are laid before their names
they smile like shy brides. Thank you,
thank you, they say. You shouldn’t have,
they say, but very softly, so it sounds
like the wind, like nothing human.