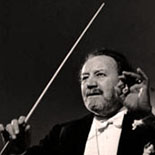 Sir Henry Joseph Wood (March 3, 1869 – August 19, 1944) was an English conductor best known for his association with London’s annual series of promenade concerts, known as the Proms.

Wood conducted the Proms for nearly half a century, introducing hundreds of new works to British audiences. After his death, the concerts were officially renamed in his honor as the “Henry Wood Promenade Concerts”, although they continued to be generally referred to as “the Proms”.