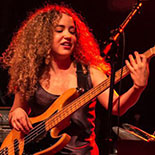 Tal has gained worldwide attention performing alongside some of rock and jazz music’s most notable artists. In addition to her work as a supporting musician to Jeff Beck, Ryan Adams, Herbie Hancock and others, she has assumed the role of bandleader of her own eponymous bands, whose musicians have included Wayne Krantz, Keith Carlock, John Beasley and Jeff “Tain” Watts. In 2008, Wilkenfeld was voted “The Year’s Most Exciting New Player” in a Bass Player magazine readers’ choice poll.