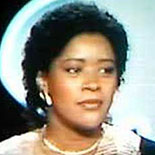 Warfield is best known for her 1986–1992 role of Roz on the popular NBC sitcom Night Court. Roz, a tough, no-nonsense bailiff in Judge Stone’s court, acted primarily as a straight woman to the other bailiff character, Bull (Richard Moll). She also starred in the sitcom Empty Nest as Dr. Maxine Douglas from 1993 to 1995. Before Night Court, she was a writer and performer on the short-lived Richard Pryor Show.