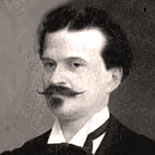 Eduard Strauss (March 15, 1835 – December 28, 1916) was an Austrian composer who, together with brothers Johann Strauss II and Josef Strauss made up the Strauss musical dynasty.

He was the son of Johann Strauss I and Maria Anna Streim. The family dominated the Viennese light music world for decades, creating many waltzes and polkas for many Austrian nobility as well as dance-music enthusiasts around Europe. He was affectionately known in his family as ‘Edi’.